Home / Tech / From Hollywood to Hitman 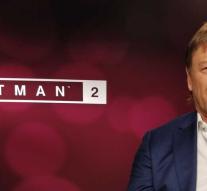 - Kiefer Sutherland, Sean Bean, Gary Oldman and Samuel L Jackson. All names that many people have seen on the white screen in one or more films. These gentlemen have another agreement and that is that they have given their voice to a character in a video game.

Sean Bean in the upcoming Hitman 2, where the Brit (known for his many roles in which he dies) plays Mark Faba, a target that you can disable as a player. But how does such a voice-acting role work?