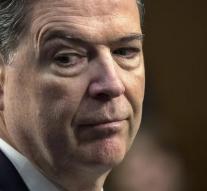 washington - The friend to whom former FBI director James Comey had written reports of his talks with President Donald Trump decided to hand over to the FBI. Daniel Richman, professor at Columbia Law School, confirmed to NBC News on Tuesday.

Comey decided, among other things, based on 'an abdominal feeling' to keep track of written reports of his talks with Trump. He suspected that he would need such reports to protect the FBI. Comey acknowledged during a hearing in the US Senate that he had asked a friend by sharing his recorded information about the talks with Trump with the press. 'I thought: that will lead to the appointment of a special prosecutor. '