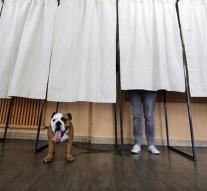 paris - The French show little interest in the first round of parliamentary elections. According to the Ministry of the Interior, only 40.75 percent of the voters had cast their vote on Sunday at 17.00.

The French go to the polls to divide the 577 seats in the Assembly National. In most constituencies, the decision will not be taken until next week. According to the polls, the president of President Emmanuel Macron, La République and Marche, has a good chance of a big majority.