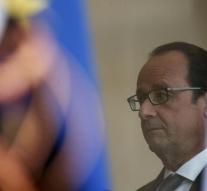 - Unemployment in France has risen further. The third quarter was on average 10.6 per cent of the French workforce without a job, compared with 10.4 percent in the previous three months. This is evident from figures published Thursday by statistics office Insee.

Unemployment increased in all age groups, but most strongly among young people. Of 15- to 24-year-olds was almost a quarter unemployed at home. There are quarter more people joined who work fewer hours than they would like. That was true for 6.7 percent of the workforce.