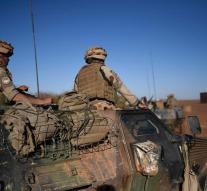 dakar - French troops killed more than twenty militants in southern Mali who had been hiding in forests in the border with Burkina Faso. The French army announced that Sunday. The operation was after the death of a French military in the area earlier this month.

The action against the militants was from both air and land. The army did not tell what group the militants belong to. Mali is regularly plagued by terrorist attacks by islamist militants, despite the international military mission in the country led by France and wherever the Netherlands participates.

Military forces are increasingly operating from Burkina Faso. Local authorities think that a new group is active that uses the forests at the border as a base.