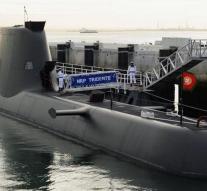 - The French trawler Daytona Thursday about 55 kilometers southeast of Lizard Point in Cornwall made a special catch a submarine. According to the Brittany coast guard was the Tridente from Portugal in the net of the fishing boat, which is registered in Saint-Brieuc. Personal accident did not occur and the damage is minor.

The Tridente was in the area working on a navigation exercise with the Royal Navy when he was beaten on the hook. ' The submarine immediately surfaced and contacted the captain of the fishing boat. He decided to make just loose and then head for the French coast. Assistance was not necessary. The submarine had caught it needed British help to get the gear out of the trunk.