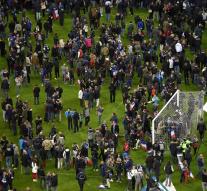 - French terror fighters were for months afraid of a series of attacks like Friday in Paris. This has a senior staff member of the French security services, which will not be mentioned by name, told the newspaper Le Figaro.

" Experts have warned that Islamic attacks on an unprecedented scale were prepared against France and that it would be nearly impossible to avert it ", the source said. The perpetrators of the attacks would like to take a long time, " so that the media can bite into it and live broadcast, to provide maximum publicity ".