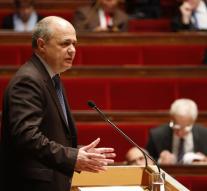 - In the political struggle against the eurosceptic National Front (FN) withdraw French Socialists their candidates in the north and southeast of France back for the second round of regional elections next Sunday. That said the party leader Jean-Christophe Cambadélis Monday at the French channel RTL.

COUNTRY Marine Le Pen took Sunday in the first round, approximately 28 percent of the vote and is the largest party. In six of the thirteen regions of the front won with a big lead. With the withdrawal of candidates socialists hope that the " Republicans " of Nicolas Sarkozy as the only major opponent party Le Pen can keep voting. " There is too great a risk of victory for the National Front to our targets in this region hold ", said Bruno Le Roux, the leader of the Socialists in the national parliament.