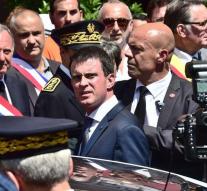 - French Prime Minister Manuel Valls was booed Monday in Nice, before a minute's silence for the victims of the attack on Thursday.

Bystanders shouted including 'murderer' and 'resign' to the prime minister, the BBC reports.

Valls is not the only one in the government since the attacks of last week's criticism has to endure. According to opposition leader Nicolas Sarkozy, the French government's inability to guarantee security in the country. He wants all people with a foreign passport and ties to Islamic extremism are deported.