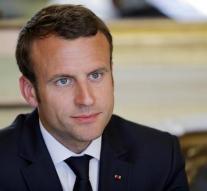 paris - French President Emmanuel Macron wants to extend the state of emergency in his country until November 1st.

That made the Élysée Palace known Wednesday after a meeting of the security cabinet. The emergency situation was set in 2015 after the attacks in Paris, involving 130 people. Parliament still has to approve the extension.

The state of emergency, which would end in mid-July, gives the authorities additional powers in the fight against terrorism, such as searches and house arrest without the need for a court order. The new extension comes after the terrorist attack in Manchester, causing 22 people to be killed.