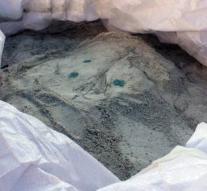 - French police have intercepted a shipment of a thousand kilos of cocaine. The drugs have a street value of about 100 million euros. Ten people were arrested, among whom certainly one Dutchman.

The cocaine originated in Colombia and was discovered in a warehouse in the south of France Bayonne. The drugs were brought by plane to France.