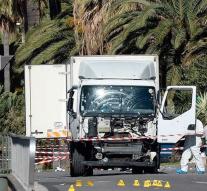 - French police have arrested ten people Monday and interrogated in connection with the bloody attack on July 14 in Nice. A man of Tunisian origin was driving a truck 86 people dead. Islamic State claimed the attack.

The attacker was shot dead by the police, but according to law, he did not act alone. The arrested people would have to deal with the preparation of the attack and delivering the car and weapons. Immediately after the attack have already been arrested several people. According to the police, some of the now-detained people from Eastern Europe.

Police say still have no evidence that the 31-year-old offender actually belonged to Islamic State.