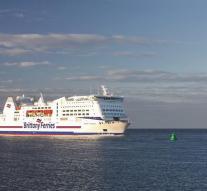 - A special unit of the French police patrols since early this week on ferries across the English Channel between France and Britain. Which reported French media on Wednesday.

The police officers will patrol randomly on passenger vessels in French waters in response to attacks in France and other terrorist threats. The first patrol was Monday. The special units were dropped off by a helicopter on a ferry was heading from Portsmouth to Caen in Normandy.