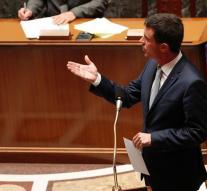 - The National Assembly, the French lower house has approved early Wednesday morning to extend the state of emergency. Which should remain in force according to the BBC until the end of January 2017, the decision must still be approved by the Senate.

Prime Minister Manuel Valls warned the National Assembly that account should be taken of more attacks.,, New attacks will come and attack more innocent deaths, 'he warned.,, We should never get used to the horrors, but we must learn to live with the threat. '