Home / World / French offensive in Mali after massacre in hotel 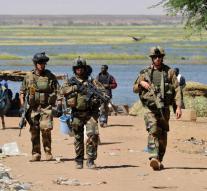 bamako - The French army last weekend during an operation against the terrorist group al-Mourabitoun in Mali ten fighters of the group 'neutralized,' reported the French Ministry of Defense Tuesday.

Al-Mourabitoun demanded the end of November the responsibility for the attack on a hotel in the Malian capital Bamako., Killing 21 people, including two perpetrators.

During the French offensive was also found a large quantity of weapons and ammunition. It is not reported what was the target of the action.

Not only al-Mourabitoun said to be behind the attack on the hotel. The movement claimed responsibility along with al-Qaeda in the Islamic Maghreb. Later suggested terror group Massina Liberation Front (MLF) to have been involved.