Home / World / FRENCH NIGHTMARE IS BACK 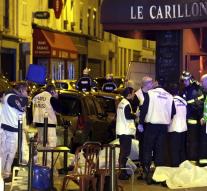 - A trail of death and destruction right through the center of Paris, who looks at a map of the French capital, can not but conclude that last night, unknown perpetrators have taken the city of light in the heart.

Eyewitness accounts from the tenth and eleventh arrondissement, with Kalashnikovs at least forty people were slain, and in and around the Stade de France, where two grenade explosions were heard, speak volumes.

" We heard a bang ", says an eyewitness in the Rue de la Fontaine au Roi. " At first we thought to fireworks or something, but then suddenly a huge salvo. Everyone understood that something terrible was playing. " Later, in the Rue de Charonne, at restaurant La Belle Equipe, which with more than ten degrees many people were sitting on the terrace outside to smoke a cigarette, heard a witness " three or four volleys. The shooter then ran down the street, maybe three minutes. Every now and then he or she fired a shot. " Another resident speaks of " a countless number of shots. Many people were in the street afterwards. " Twitter appeared last night photographs taken from a balcony, in one picture at least ten deaths and injuries are visible. Residents are trying to cover the bodies of the victims with blankets.

Reporters who rushed to the hostage-taking in theater Le Bataclan heard as " ten minutes long shots ". A witness : " The attackers shouted " Allah Akbar " (God is great, ed.) And started shooting at the crowd " Witnesses at La Belle Equipe reported the same. Someone else who was present at the shooting, said the attackers " This is for Syria " shouted.

This means that France's biggest nightmare, terror in the name of Islam, is back from never really been away, a ' scooter killer Mohammed Merah in Toulouse and the atrocities in early January at Charlie Hebdo and in a Jewish supermarket. France has the largest Muslim community in Europe. Part of the French Muslims to avenge the attacks of Paris, the Islamic State in the Middle East.