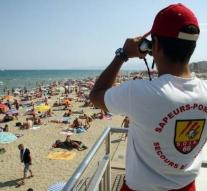 - The French armed police will patrol during the summer months on the beaches. Normally, the beach walk gendarmerie usually in swimsuit and without weapons along the surf but terror requires other measures.

The crew of the rescue stations on the beaches are equipped with a special pouch in which they can carry their weapons.,, The travelers will not see any armed men in heavy clothing. They will see lifeguards' said a director of the police unions on the radio station Europe 1.

It is the first time that armed lifeguards go off.