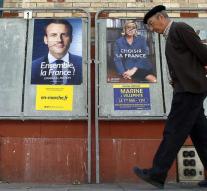 paris - Justice in France has opened a search for counterfeit news that is being distributed to influence the presidential elections this Sunday. This happens after President Candidate Emmanuel Macron submitted an official complaint about this.

His opponent, Marine Le Pen, was in the TV debate Wednesday between candidates for allegations that Macron has a secret foreign bank account. Macron denies that.