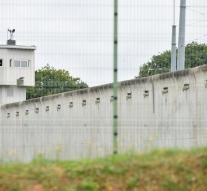 - In a prison in the French Le Mans is a hostage situation in progress. A detainee holds since late Thursday morning, a security guard caught under threat of a knife.

According to French media, the man demanded that he be transferred to another prison. Why he wants, is not clear. The authorities have mobilized various special units and set up a crisis center.