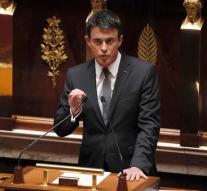 - Under protest of the opposition in parliament has prevented the French Government that the heavily controversial new labor law would be voted down. Prime Minister Manuel Valls Tuesday took the decision to do so by a special rule about applying the Constitution.

This law was adopted in the second term in the French parliament. Only a confidence vote- which must be assumed- could still throw a spanner in the works. Also in the first term mood the government applied the special rule, because it was not certain that the law could count on a majority in parliament. A word about the labor code is now up to the Senate, the French Senate.

Valls breaking the opinion of the parliament in 2015 even once, then went to economic measures.