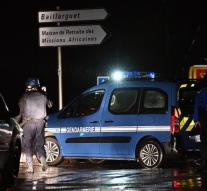 - The French police Friday after a manhunt arrested the man Thursday night a woman stabbed in a retirement home for missionaries. The perpetrator could be a former miliary 47.

The masked man insisted Maison de Petraite have worked a setting for retired monks as a missionary in Africa, Thursday night around ten o'clock inside. He had a knife and a sawed-off shotgun with him.

The man held the woman, a staff member dead and then hit on the run. The 59 inhabitants of the institution were unharmed.