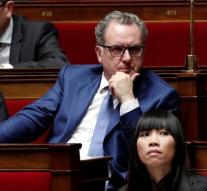 Ferrand left the government earlier this year after he became involved because of a real estate affair. He would, as a boss of an insurance bank in Brittany, have improperly favored his girlfriend by hiring office space. The politician denied all allegations.

The French court announced that no evidence has been found that Ferrand was actually wronged six years ago. In addition, any conflicts of interest may already be a problem. The affair around the minister was painful to Macron, who has just made a spearhead of policing.