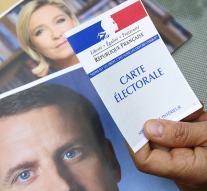 paris - The committee that oversees the French presidential elections meets on Saturday because of the hack at the campaign team of presidential candidate Emmanuel Macron.

The electoral commission called on French media to be reluctant to publish details of internet-leaked e-mails. Because the campaigns have been officially terminated, it may be punishable to report on the content of the documents.

The commission came with that statement after the Macron team reported the hack. His Movement And Marche! Said that it seems that real documents on the Internet are mixed with fake documents to 'dispel'.

The Front National, the rival of Macron, responded with interest in leaking the mails. A senior party official, Florian Philippot, wondered on Twitter whether the 'Macronleaks' contains information that deliberately ignored research journalists.

That comment was bad at Macron's party. His spokesman called Philippot's remark 'ridiculous.'