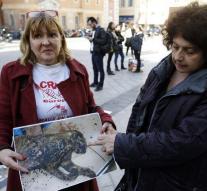 - A court in the southern French city of Nice, a man was sentenced to two years in prison because he had burned a cat alive. That news channel BFM TV reported Tuesday.

The cat, named Griffin and six years old, was like a burning torch from the seventh floor thrown down.

Animal rights activists expressed satisfaction with the verdict.,, This fits really with what we expected and we hope this is a precedent for the rights of animals, '' said spokesperson Chantal Fontanesi of the Association for Animal Rights.