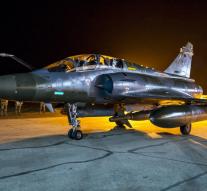 - The French Air Force performs Sunday a heavy bombardment from the Syrian city of Raqqa, the unofficial capital of the Islamic State. That is confirmed by the French Ministry of Defence.

Ten planes would have participated in the bombardment. In addition, include a command center, a recruitment center and hit an ammunition depot, the ministry said. The air strike is confirmed by Raqqa Is Being Slaughtered Silently, an activist group that does clandestinely record of what happens in the IS'hoofdstad.

Earlier Sunday it was announced that France and the US have held consultations on how to tackle Islamic State. This would include agreed that US intelligence agencies will be more information about IS-share targets with France, reports the Wall Street Journal. Possibly the bombing of Raqqa the first result of this enhanced cooperation.

France has pursued since 2014 air strikes on targets in Iraq IS and since September this year in Syria.