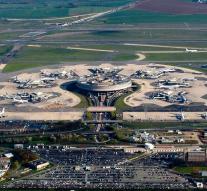 - French airports not close because of the attacks in Paris on Friday. That the French Ministry of Foreign Affairs announced. Also trains continue driving. Earlier it was announced that the French borders were closed. President François Hollande has declared a state of emergency throughout France.

The Eurostar trains through the Channel Tunnel just ride Saturday. Travelers should check in one hour before departure for safety. Those who no longer wants to travel by train, can exchange the ticket.

Fly Society, the American Airlines flights from the US to Paris for the time being.