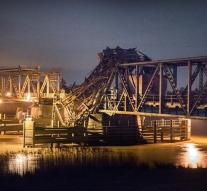 weener - A cargo ship has collided head-on Thursday on a railroad bridge over the river Ems in Germany Weener, just across the border at Nieuweschans. The middle part of the bridge is therefore affected seriously damaged.

No one was injured in the collision. As a result of the damage the shipping on the Ems is temporarily obstructed. Rail traffic will continue much longer disturbed. That also affects the train service from the Netherlands. " The track is completely destroyed ", said a press officer of the German river police against the broadcaster NDR. According to the spokesman, the bridge can be considered lost.The clash is likely the result of miscommunication between the captain of the ship and the keeper.
NEW