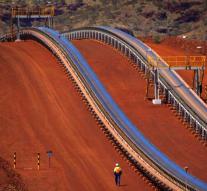 canberra - A runaway freight train has driven about 92 kilometers without a driver in the Australian Pilbara region. My company BHP Billiton Ltd. The train, which consisted of four locomotives and 268 wagons, eventually deliberately derailed.

The company reports that the train was driving away when the operator had disembarked to carry out a check. The vehicle then thundered towards the city of Port Hedland. The BHP control room in Perth eventually let the train run off the rails. The mining company says to investigate the incident with the authorities.