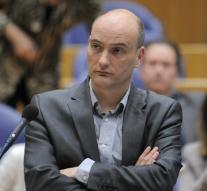 - Science is too much driven by government and industry. That concludes Member of Parliament for the SP Jasper van Dijk.,, The independent research was at stake. 'The politician did with the scientific office his party survey of about a thousand scientists and Saturday will present his report' The scientist at the word. '

,, With cutbacks and demands of external customers, researchers are increasingly forced into a straitjacket. That's a shame, because real breakthroughs come precisely from independent research, 'said Van Dijk. Respondents according to him from all external pressures.,, The science should no longer be employed by external donors, including corporations. 'Van Dijk complains,, science to order. 'He complains 38 percent of co-workers to his research on influence of the scientific work.

Not only freedom, but also the quality is according to Van Dijk under pressure.,, It is increasingly looking at quantitative data, such as number of publications, promotions and diplomas. All tape around application procedures also leads to stress and high pressure. '