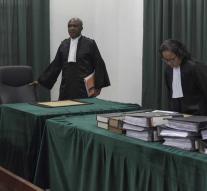 paramaribo - Prosecutor Roy Elgin called on the Surinamese war council on Thursday to imprison Jimmy Stolk, imprisonment officer, who is also suspicious in the criminal proceedings around the December killings. According to the Auditor-Military, Stolk was able to do nothing but follow a service order on December 8, 1982 and pick up one of the later victims from his house.

Stolk, who was then the prisoner in Paramaribo, was commissioned by Sergeant Paul Bhagwandas. According to Elgin, these days, Bhagwandas died of the murder party in Fort Zeelandia.

In his explanatory statement on the claim for detention, prosecutor Elgin quoted from Stolk's earlier hearing. He then declared that he did not know what would happen to the people he had to pick up. If he had known that, Stolk would have acted differently, said Elgin, who motivated his claim for acquittal.