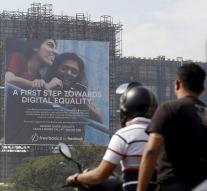 - Egyptians through the Facebook Free Basics initiative had free internet access, out in the cold. After a period of two months, the Egyptian Ministry of Telecommunications decided not to renew the license for the project. The reason is not yet known.


Free Basics is an initiative of Facebook for people who can not afford an Internet connection while giving limited access to the worldwide web. They only have access to certain sites and services including Facebook and Wikipedia.
According to Facebook had in Egypt more than a million people access the Internet thanks to the Free Basics initiative. A spokesman let AP know to be disappointed that the stop is put. He says he does not know why the license has not been renewed and hopes for a quick solution.
In India, the initiative is under fire because critics believe that it is not a commercial company to determine which sites people can and can not get to see. They also believe that small and startup companies are disadvantaged by the initiative.
NEW