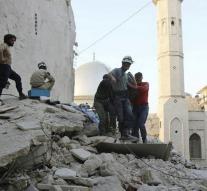 - France turns the International Court of Justice in The Hague to launch an investigation into possible war crimes in Aleppo. French Foreign Minister Jean-Marc Ayrault said on Monday in one breath that support for the bombing of the Syrian town by Russian aircraft on disapproval of France.

Ayraults comments come at a remarkable moment, a little over a week before the visit of Russian President Vladimir Putin to France. His colleague managed to Hollande of France that his decision to Putin personally received depends on the situation in Aleppo.

We are against the bombing of Aleppo, said the minister, 'we want to save the population of the city.' 'If President Putin decides to speak, than that no meeting will be to merely exchanging pleasantries,' said Ayrault.