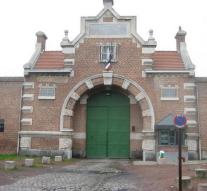 - The French government wants to build 33 new prisons and renovate older to address the continuing overcrowding in the prison system. The constant crowds in prisons bears the French justice to the radicalization of Muslim detainees.

The International Centre for Prison Studies (ICPS) maintains a list of countries with overcrowded prisons. France takes on the list in third place in: while there is place for 58 587 prisoners are 68. 253 people behind bars.

An estimated 325 detainees have links with terrorist organizations. In addition, some 1,400 people during their captivity recruited by extremist Muslims. The French Justice hopes the new prisons to take the sting out of this problem. 'Believe Dissemination thrives in overcrowded prisons, not only because of the crowds, but also because some prisoners lose all hope,' said Justice Minister Jean-Jacques Urvoas last month.