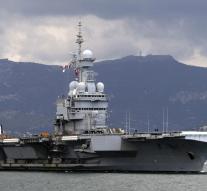 - France has foiled an attack on a navy personnel in the port city of Toulon. That the French Interior Minister Bernard Cazeneuve Tuesday declared.

A 25- year-old man has been arrested. He has stated that he actually wanted to Syria to join there with radical Islamists. Because his passport was taken, he decided to carry out an attack on French soil.

According to the French television has to have the man also admitted contact with a member of the Islamic State.