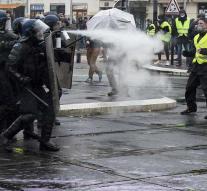 paris - France has begun an investigation into possible Russian interference with the Yellow Hesjes protests that have kept the country in its grip for a few weeks now. French security services are examining whether the Russians are indeed interfering with the demonstrations, said foreign minister Le Drian.

For example, six hundred Twitter accounts that usually promote the Kremlin would focus mainly and extensively on France, with the use of the hashtag #giletsjaunes, the French name of the Yellow Hesjes. Social media experts say that it seems that those accounts want to enlarge the conflict.