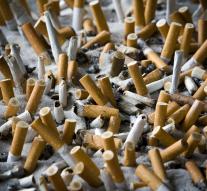 - Cigarettes are soon 'anonymous' on the shelves in France. The French parliament decided Thursday to introduce a rule that cigarettes may be sold only in a neutral standard package, without clear logo.

The brand name can only be as plain text on it. The measure should smoking prevention among young people. Research shows that young people smoke less cigarettes be sold in neutral packaging. The tobacco industry is strongly opposed to the anonymous parcels and spoke of a \x26amp; quot; \x26amp; quot ;. historical error

Australia introduced the neutral packages in 2012 and was the first country in the world. The packages have no obvious logos but horrifying images that refer to diseases that you can get by smoking. Meanwhile, Australia was following the example of Ireland and Britain.