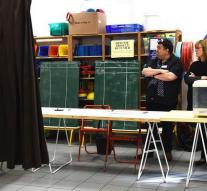 paris - The rise in the second round of the French presidential elections was a little lower than five years ago on Sunday afternoon. According to the Ministry of the Interior, about 28.23 percent of voters have already voted against 30.7 percent at the same time in 2012.

The turnaround is also lower than in 2007. Then around noon had voted about 34.1 percent of the voters.