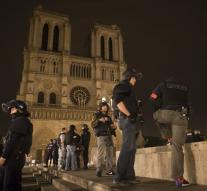 - France mobilizes another 1500 soldiers in the fight against terrorism. This has the Elysee Palace reported Saturday. Friday nights were already 200 soldiers sent on the road.

The 1500 are in addition to the troops that were already deployed for building security, after the attack on the satirical magazine Charlie Hebdo.