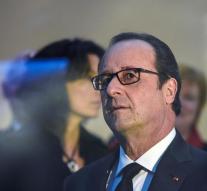 - War threatened treasures from countries such as Syria and Iraq can have a safe haven in a few years in northern France. In the town of Liévin, between Lille and Arras, opened in 2019 a brand new depot building of the Louvre. President Francois Hollande announced Tuesday that this property which he is concerned is open to cultural heritage that is in danger because 'terrorists, barbarians want to destroy it.'

'The primary purpose of the facility in Liévin is to house the stored collection of the Louvre,' Hollande said during a visit to the construction site. His idea to make it open for endangered art, he will propose in December at a conference on this subject in Abu Dhabi.

The construction of the collection building starts next year. If everything goes according to plan, it opens its doors in 2019. A few kilometers away at Lens since 2012, the museum Louvre-Lens. There are exhibited works from the collection of the most visited museum in the world.