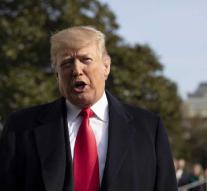 paris - French Foreign Minister Jean-Yves Le Drian has called on Donald Trump to stop interfering with the protests of the demonstrators in Yellow Hesjes in France. Le Drian said in a TV program that France does not interfere in domestic affairs in the US. He stressed that France expects the same from Washington.

Trump tweeted Saturday that the Paris climate agreement is not doing so well for France. 'Protests and uproar throughout France. People do not want to pay large sums of money, many of which go to third world countries (which are led in a dubious way) to perhaps protect the environment. '

The American president reported that French demonstrators in the street called 'we want Trump'. According to Le Drian, that is not true.