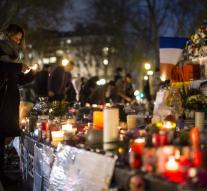 - France Friday commemorates the 130 victims of the terrorist attacks of two weeks ago. The "extremely simple " ceremony starts at 10.30 at the Dome des Invalides, where Napoleon Bonaparte is buried.

During the ceremony of almost an hour is only one man to say: President François Hollande. The public are also represented some of the 350 people in Le Bataclan concert hall and terraces of bistros and cafes were injured. She and relatives of the dead are initially absorbed by the specially appointed interministerial committee for assistance to the victims.

A pivotal role during the ceremony is reserved for the presidential guard. Representatives of the safety and emergency services that are used in the attacks, are present.

Hollande has called on the population Friday stabbing the French flag. The sale of the French tricolore has exploded after the attacks.