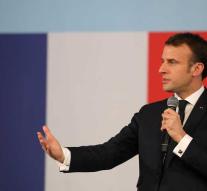 paris - France has recovered five children from camps in northeastern Syria. According to the French Ministry of Foreign Affairs, they are very young and vulnerable.

None of the children would be older than five years. A diplomatic source says that the mothers are all dead. The fathers are also deceased or missing. The children flew back with an army plane and are under medical supervision. According to the source, more children may be picked up, but mothers do not have to count on repatriation.