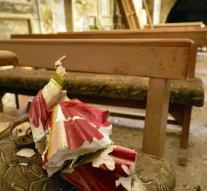 paris - Nearly 130 French who took part in the Islamic State struggle and are now trapped in Kurdish camps in Syria will be transferred to France in the coming weeks.

This is reported by the French news site BFMTV. According to the sources of the news site, the French authorities fear that the jihadists caught will soon be lost as a result of the instability in the region, partly due to the departure of American soldiers from Syria.