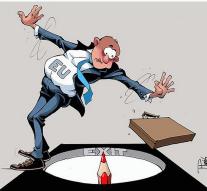 - In terms of security, immigration and the economy, the European Union should be given more clout. At the same time,, Europe better cope with different levels of ambition. ' That vision together recorded the foreign ministers of France and Germany.

,, A strong Europe in a world full of uncertainties, '' called the document in which they describe their plans. Both countries want clear EU priorities be established in the field of foreign affairs and security. The EU needs to create a common asylum and immigration policy. A European border guard and is part of it. Furthermore, there must be some concerns France and Germany to develop a European response to the increase in the number of economic immigrants.

In the economic field, the countries will, by 2018,, a tax authority 'set up for the eurozone. For example, must ensure investment in countries that have been hardest hit by the financial crisis.


The Franco-German plan was in the works when the British last week voted for a departure from the European Union.