Home / World / France and Africa together against terror 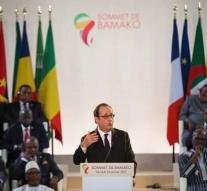 bamako - France and several African countries in the future work more closely against terrorism and illegal migration. Which announced French President Francois Hollande on Saturday after a meeting with more than thirty African heads of state and government officials in the Malian capital Bamako.

Africa and France will soon joint operations against traffickers and drug dealers and thus tackle the financing of terrorism. Hollande wants to reserve the next five years, 23 billion euros for the 'development and growth in Africa. 'That should reduce illegal migration, as Hollande said after the Franco-African summit.