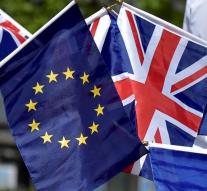 brussels - The major political groups in the European Parliament want to take the time to see how to proceed now that the United Kingdom has chosen to leave the European Union.

The European People's Party, the largest political group which also is in the CDA, it wants the negotiations on the British departure within the deadline of two years.,, The British decision caused great damage to both sides. Europe now needs a period of reflection. ''

The Social Democratic group, the second largest, shocked by the massive backlash,, '. The party will take the lead to bring Europe closer to its citizens by putting an end to the austerity policy.


The conservative group, which the British Tory's belong, wants to look towards the future and hopes to have a cool and sensible response to the EU countries.,, We are continuing our mission to reform the EU.

The European Greens,, extremely disappointed '.,, But this should not be the beginning of a domino effect in the EU. All pro-European forces must now seek self-critical for an answer to why the gap is growing between citizens in Europe. European governments must now formulate a response together which increases the confidence in the EU. ''