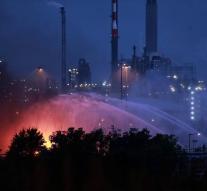 - The death toll from the explosion at the plant of BASF in Ludwigshafen nearly two weeks ago has risen to four. The German chemicals group made aware that Saturday is a member of the brigade deceased from his injuries.

The explosion and subsequent fire at the port complex had already claimed three lives. Two of the victims were killed firemen, the third crew member of a moored tanker. In addition, were regrettable thirty wounded, several were in bad shape.

The researchers are trying to figure out the circumstances of the accident, suggest that an employee of an external company specified a pipeline with his grinder. The man was seriously injured.