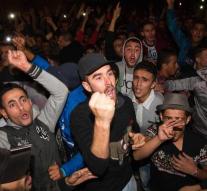 rabat - Again there are mass protests in Morocco in connection with the death of a fishmonger on Friday. Monday people went to the streets for the fourth day in a row. In the north of Morocco protested thousands of people against the way citizens are treated by the police and government.

The fishmonger Friday was crushed to death when he tried to save his business out of a garbage truck, where it was thrown in by agents.

Large protests in Morocco are very unusual. King Mohammed VI governs the country still with a firm hand. In 2011, Morocco came just as in neighboring country a kind of Arab Spring started, but there was a rapid response by the government. Reforms were implemented quickly, which eased the protests. The current protests are the biggest since that brief Arab Spring in 2011.

Not only protested on the streets. Also on social media is the current protests and criticism incessantly. The criticism focuses on the so-called Makhzen, a term which the Moroccan royal family is meant.