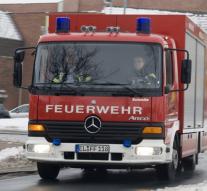 - In a house fire in the German locality Pforzheim in the state of Baden-Württemberg, four people were killed. Four others were injured, two of them severely.

The house where several families lived in the night of Monday to Tuesday completely burned.

According to the fire brigade were four fatal victims probably in the attic. One of the people who was seriously injured is probably jumped out the window.

The cause of the fire is not yet known. According to the police lived in the building, especially foreigners. There are no indications that the fire ignited.