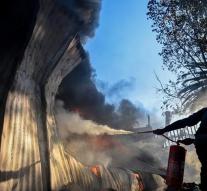 - A fire in a slum of the South African capital Pretoria are certainly met four people dead. The fire broke out Saturday night and spread rapidly.

According to rescue dozens of huts went up in flames, leaving hundreds of people homeless.

The cause of the fire is not yet known. This may have caused a fallen candle for the tragedy in the township.